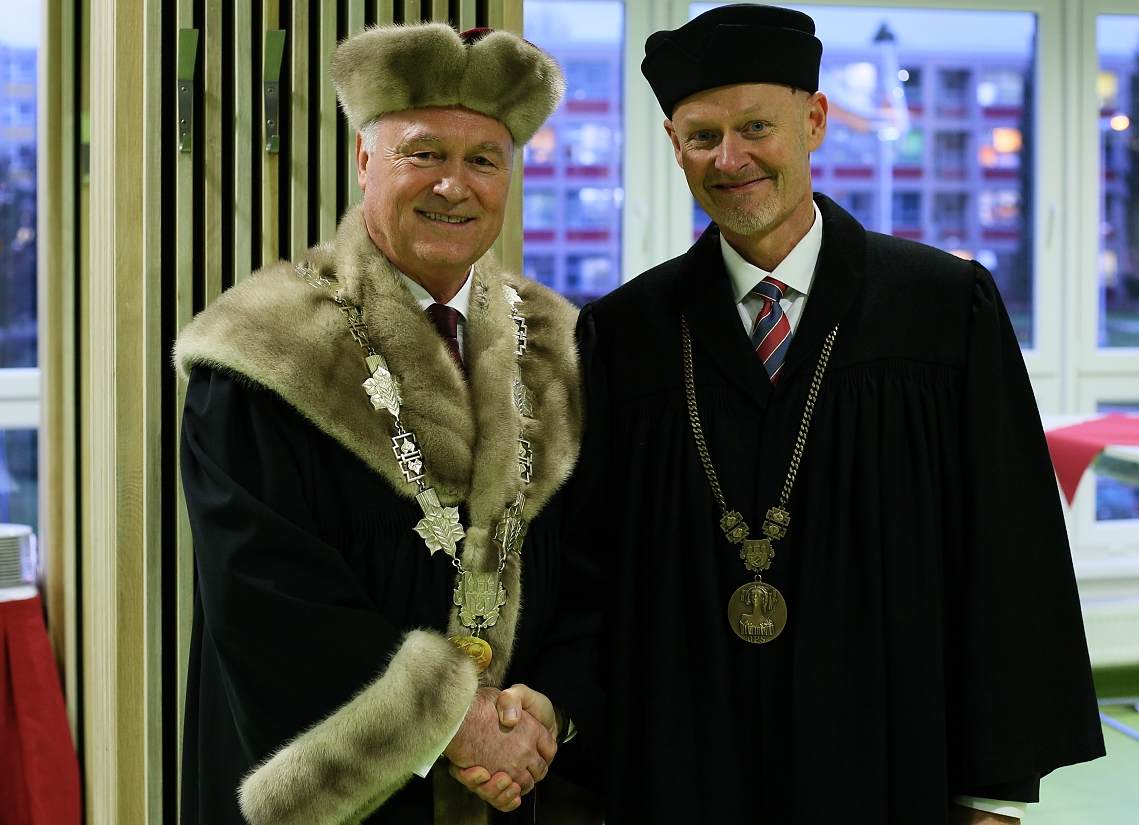 The Czech University of Life Sciences in Prague has awarded Prof. Dr. Dr. h. c. Bill S. Hansson an honorary doctorate for important collaboration with the Faculty of Forestry and Wood Sciences. The title was presented to the eminent scientist in the field of chemical ecology by the CZU Rector during the ceremonial assembly of the Scientific Board held on 4 December 2017 in the University auditorium.

Prof. Bill Hansson currently cooperates with the CZU Faculty of Forestry and Wood Sciences primarily through the Faculty-based Centre of Excellence for Mitigation. The Centre has been established on the basis of implementation of the “EXcelent TEam for MITigation – Kůrovec (EXTEMIT-K)” project, and Prof. Bill Hansson has accepted the position of the External Advisory Board (EAB) chairman. The role of the EAB is to monitor scientific activities of the research team and ensure its optimal solutions, together with the coordinator of the Centre during the entire duration of the project (until September 2022). Developing close cooperation with FFWS has led to the possibility of study and research stays for FFWS postgraduate students and staff at the Max Planck Institute of Chemical Ecology (ICE) in Jena, Germany. At the same time, interest has been raised in the preparations of joint European projects under which the ICE would become a strategic partner of the Faculty. Both, the current as well as the planned collaboration of Prof. Hansson, mean a considerable impetus for development of the FFWS, namely the EXTEMIT-K but also of the departments (Department of Forest Protection and Entomology; Department of Forest Ecology; Department of Genetics and Physiology of Forest Trees; Department of Forest Management).

Professor Bill Hansson (born on 12 January 1959, married, two children) is active at the Max Planck Institute for Chemical Ecology (Germany) in the position of the Director of the Department of Evolutionary Neuroethology. He is one of the leading researchers in the area of chemical ecology and neurology of insects, insect communication processes at functioning gene levels, and insect proteomics. Since the late 1980s, he has been carrying out long-term top-level innovative research. He specialises in his studies in the insect orders of Lepidoptera and Coleoptera, namely in their connection with forestry as well as agriculture. He uses the Diptera order in his research as a model group for performing genetically manipulated experiments in the area of neurobiology. The issues of development of new plant protection measures against pathogenic insects are closely related to the above mentioned topics.

Prof. Bill Hansson is the holder of one European patent, the author or co-author of 283 original scientific papers published in prestigious global scientific journals, 39 requested reviews and book chapters, and the editor of one separate book. The web of science (WOS) records nearly 9,500 citations of his works with his H Index rating at 55. Awarding of a range of prizes and awards, nearly 30 requested lectures, and membership in the editorial boards of 5 scientific journals are convincing proofs of his recognition by the scientific community.